Summary: SUV sales in China from January to May

Gasgoo.com (Shanghai) - The SUV segment continues to be one of the hottest in the Chinese automobile market, with new models being constantly introduced and competition growing increasing fiercely. According to statistics from Gasgoo.com (Chinese), a total of 3.23 million SUVs have been sold in the country from January to May, up 45.3% year-on-year. SUVs accounted for 36.2% of all passenger automobiles sold in the country over the five-month time period.

Great Wall Motor remains the top seller of SUVs from January to May. It was followed by Changan, SAIC-GM-Wuling, Shanghai GM, Beijing Hyundai, Dongfeng Nissan, Dongfeng Honda, GAC Motor, JAC Motor and Changan Ford. These ten manufacturers have sold a total of 1.62 million SUVs, accounting for just over half of all SUVs sold in the country. All of these manufacturers were able to achieve positive year-on-year growth rates over the time period, with GAC’s sales increasing nearly five-fold. 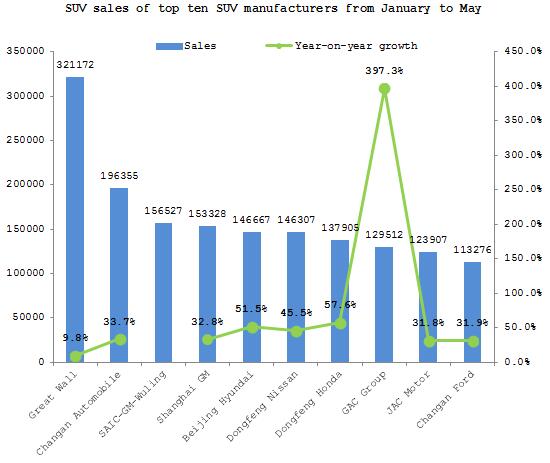 Great Wall sold a total of 321,172 SUVs from January to May, far more than any of its competitors, with its sales growing nearly 10% year-on-year. Great Wall’s monthly sales broke the 60,000 mark in May. The Haval H6 is playing a vitally important role, accounting for 63.1% of the manufacturer’s total SUV sales volume.

Changan ranked second overall in the SUV sales charts with a total 196,355 units sold, up 33.7% year-on-year. The manufacturer’s popular CS75 and CS35 have now been joined by the new CX70, which made its debut in April.

Shanghai GM, the best-selling foreign JV brand in terms of Chinese SUV sales, managed to rank fourth in the charts, thanks in no small part to the Buick Envision’s popularity in the country. Shanghai GM SUV sales totaled 153,328 units, representing year-on-year growth of 32.8%.

Rival JV Beijing Hyundai’s sales totaled 146,667 units, up 51.5% year-on-year. Rounding up the top seven were Dongfeng Nissan and Dongfeng Honda, whose sales grew 45.5% and 57.6%, respectively. According to statistics, 44.5% of Dongfeng Nissan’s sales came from X-Trail, which has managed to achieve sales growth of 18.9%. Meanwhile, sales of the two most popular Dongfeng Honda SUV models, the CR-V and XR-V, posted year-on-year sales growth rates of 45.^% and 72.6%, respectively.

Previous：Why GM dealers have a chance to shine
Next：The interaction of design, material selection, and processing in the failure of a gear—Part 2
Posts by Topic
Recent Posts