Gasgoo.com (Shanghai) - According to statistics compiled by Gasgoo.com (Chinese), a total of 2.17 million passenger automobiles were sold in China in the month of January. While that figure represents year-on-year growth of 12.0%, it is 8.5% less than the total amount sold in the previous month of December 2015.

Domestic own brand manufacturers continued to dominate the passenger automobile market with total January sales of 950,329 units, up 24.3% year-on-year. Own brands’ share in the market grew 4.3 percentage points from last year, with own brands now accounting for 43.6% of all passenger automobiles sold in the country in January. Own brands benefited greatly from SUV sales, with SUVs accounting for 49.8% of their overall sales volume. 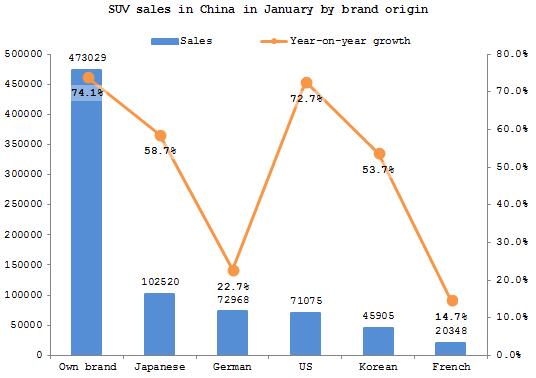 The Great Wall Haval H6 was January’s best-selling SUV model for the month of January. It was followed by the SAIC-GM-Wuling Baojun 560, GAC Trumpchi GS4, VW Tiguan, Changan CS75, JAC Refine S3, Buick Envision, Changan CS35, Nissan X-Trail and Great Wall Haval H2. Seven of those above models were made by own brands. Both the Haval H6 and Baojun 560 achieved monthly sales of over 40,000 units, while the Trumpchi GS4 surpassed the VW Tiguan to take the number three spot. 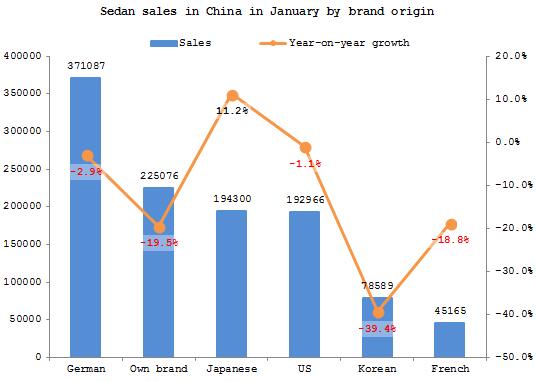 The VW Lavida led the sales charts for January, followed by the VW Jetta, Buick Excelle, VW Santana, VW Sagitar, Toyota Corolla, Chevrolet Cruze, Ford Escort, VW Golf and VW Passat. The Lavida achieved year-on-year sales growth of 21.9% in January, with a total of 48,387 units sold over the course of the month. By comparison, last January’s top-selling sedan, the Nissan Bluebird Sylphy, has dropped far off the top ten sales charts. Its sales fell over 30% year-on-year, totaling 16,084 units. The Geely Emgrand EC7 was the best-selling own brand sedan of the month, ranking just outside of the top ten with a total sales volume of 22,512 units. 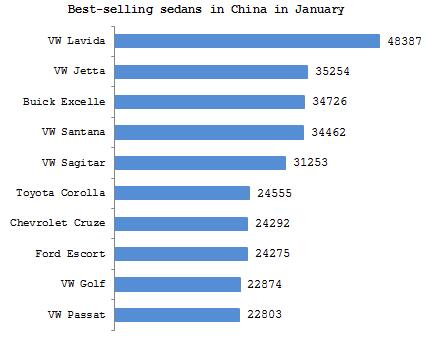 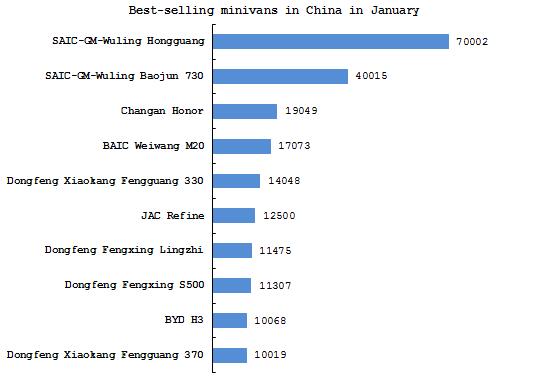