Processes and printers for 3D printing

A large number of additive processes are available. The main differences between processes are in the way layers are deposited to create parts and in the materials that are used. Each method has its own advantages and drawbacks, which is why some companies offer a choice of powder and polymer for the material used to build the object.[43] Others sometimes use standard, off-the-shelf business paper as the build material to produce a durable prototype. The main considerations in choosing a machine are generally speed, costs of the 3D printer, of the printed prototype, choice and cost of the materials, and color capabilities.[44] Printers that work directly with metals are generally expensive. However less expensive printers can be used to make a mold, which is then used to make metal parts.[45]

Some methods melt or soften the material to produce the layers. In Fused filament fabrication, also known as Fused deposition modeling (FDM), the model or part is produced by extruding small beads or streams of material which harden immediately to form layers. A filament of thermoplastic, metal wire, or other material is fed into an extrusion nozzle head (3D printer extruder), which heats the material and turns the flow on and off. FDM is somewhat restricted in the variation of shapes that may be fabricated. Another technique fuses parts of the layer and then moves upward in the working area, adding another layer of granules and repeating the process until the piece has built up. This process uses the unfused media to support overhangs and thin walls in the part being produced, which reduces the need for temporary auxiliary supports for the piece.[47]

Laser sintering techniques include selective laser sintering, with both metals and polymers, and direct metal laser sintering.[48] Selective laser melting does not use sintering for the fusion of powder granules but will completely melt the powder using a high-energy laser to create fully dense materials in a layer-wise method that has mechanical properties similar to those of conventional manufactured metals. Electron beam melting is a similar type of additive manufacturing technology for metal parts (e.g. titanium alloys). EBM manufactures parts by melting metal powder layer by layer with an electron beam in a high vacuum.[49][50] Another method consists of an inkjet 3D printing system, which creates the model one layer at a time by spreading a layer of powder (plaster, or resins) and printing a binder in the cross-section of the part using an inkjet-like process. With laminated object manufacturing, thin layers are cut to shape and joined together. 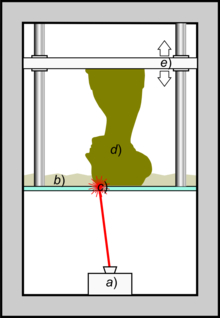 Schematic representation of Stereolithography; a light-emitting device a) (laser or DLP) selectively illuminate the transparent bottom c) of a tank b) filled with a liquid photo-polymerizing resin; the solidified resin d) is progressively dragged up by a lifting platform e)

Other methods cure liquid materials using different sophisticated technologies, such as stereolithography. Photopolymerization is primarily used in stereolithography to produce a solid part from a liquid. Inkjet printer systems like the Objet PolyJet system spray photopolymer materials onto a build tray in ultra-thin layers (between 16 and 30 µm) until the part is completed. Each photopolymer layer is cured with UV light after it is jetted, producing fully cured models that can be handled and used immediately, without post-curing. Ultra-small features can be made with the 3D micro-fabrication technique used in multiphoton photopolymerisation. Due to the nonlinear nature of photo excitation, the gel is cured to a solid only in the places where the laser was focused while the remaining gel is then washed away. Feature sizes of under 100 nm are easily produced, as well as complex structures with moving and interlocked parts.[51] Yet another approach uses a synthetic resin that is solidified using LEDs.[52]

In Mask-image-projection-based stereolithography, a 3D digital model is sliced by a set of horizontal planes. Each slice is converted into a two-dimensional mask image. The mask image is then projected onto a photocurable liquid resin surface and light is projected onto the resin to cure it in the shape of the layer.[53] Continuous liquid interface production begins with a pool of liquid photopolymer resin. Part of the pool bottom is transparent to ultraviolet light (the "window"), which causes the resin to solidify. The object rises slowly enough to allow resin to flow under and maintain contact with the bottom of the object.[54] In powder-fed directed-energy deposition, a high-power laser is used to melt metal powder supplied to the focus of the laser beam. The powder fed directed energy process is similar to Selective Laser Sintering, but the metal powder is applied only where material is being added to the part at that moment.[55][56]

As of December 2017, additive manufacturing systems were on the market that ranged from $99 to $500,000 in price and were employed in industries including aerospace, architecture, automotive, defense, and medical replacements, among many others. For example, General Electric uses the high-end model to build parts for turbines.[57] Many of these systems are used for rapid prototyping, before mass production methods are employed. Higher education has proven to be a major buyer of desktop and professional 3D printers which industry experts generally view as a positive indicator.[58] Libraries around the world have also become locations to house smaller 3D printers for educational and community access.[59] Several projects and companies are making efforts to develop affordable 3D printers for home desktop use. Much of this work has been driven by and targeted at DIY/Maker/enthusiast/early adopter communities, with additional ties to the academic and hacker communities.[60]