Polypropylene (PP), also known as polypropene, is a thermoplastic polymer used in a wide variety of applications. It is produced via chain-growth polymerization from the monomer propylene.

Polypropylene belongs to the group of polyolefins and is partially crystalline and non-polar. Its properties are similar to polyethylene, but it is slightly harder and more heat resistant. It is a white, mechanically rugged material, and has a high chemical resistance.[1] Polypropylene is the second-most widely produced commodity plastic (after polyethylene) and is often used in packaging and labeling. In 2013, the global market for polypropylene was about 55 million tonnes.[2]

Phillips Petroleum chemists J. Paul Hogan and Robert Banks first polymerized propylene in 1951.[3] Propylene was first polymerized to a crystalline isotactic polymer by Giulio Natta as well as by the German chemist Karl Rehn in March 1954.[4] This pioneering discovery led to large-scale commercial production of isotactic polypropylene by the Italian firm Montecatini from 1957 onwards.[5] Syndiotactic polypropylene was also first synthesized by Natta and his coworkers.

After polyethylene, polypropylene is the most important plastic with revenues expected to exceed US$145 billion by 2019. The sales of this material are forecast to grow at a rate of 5.8% per year until 2021.[2] 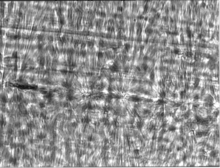 Polypropylene is in many aspects similar to polyethylene, especially in solution behaviour and electrical properties. The methyl group improves mechanical properties and thermal resistance, although the chemical resistance decreases.[6]:19 The properties of polypropylene depend on the molecular weight and molecular weight distribution, crystallinity, type and proportion of comonomer (if used) and the isotacticity.[6] In isotactic polypropylene, for example, the methyl groups are oriented on one side of the carbon backbone. This arrangement creates a greater degree of crystallinity and results in a stiffer material that is more resistant to creep than both atactic polypropylene and polyethylene.[7]

The density of PP is between 0.895 and 0.92 g/cm³. Therefore, PP is the commodity plastic with the lowest density. With lower density, moldings parts with lower weight and more parts of a certain mass of plastic can be produced. Unlike polyethylene, crystalline and amorphous regions differ only slightly in their density. However, the density of polyethylene can significantly change with fillers.[6]:24

Polypropylene is normally tough and flexible, especially when copolymerized with ethylene. This allows polypropylene to be used as an engineering plastic, competing with materials such as acrylonitrile butadiene styrene (ABS). Polypropylene is reasonably economical.[citation needed]

Polypropylene has good resistance to fatigue.[8]:307

The thermal expansion of polypropylene is very large, but somewhat less than that of polyethylene.[9]

Polypropylene at room temperature is resistant to fats and almost all organic solvents, apart from strong oxidants. Non-oxidizing acids and bases can be stored in containers made of PP. At elevated temperature, PP can be dissolved in nonpolar solvents such as xylene, tetralin and decalin. Due to the tertiary carbon atom PP is chemically less resistant than PE (see Markovnikov rule).[10]

Most commercial polypropylene is isotactic and has an intermediate level of crystallinity between that of low-density polyethylene (LDPE) and high-density polyethylene (HDPE). Isotactic & atactic polypropylene is soluble in P-xylene at 140 °C. Isotactic precipitates when the solution is cooled to 25 °C and atactic portion remains soluble in P-xylene.

The melt flow rate (MFR) or melt flow index (MFI) is a measure of molecular weight of polypropylene. The measure helps to determine how easily the molten raw material will flow during processing. Polypropylene with higher MFR will fill the plastic mold more easily during the injection or blow-molding production process. As the melt flow increases, however, some physical properties, like impact strength, will decrease. 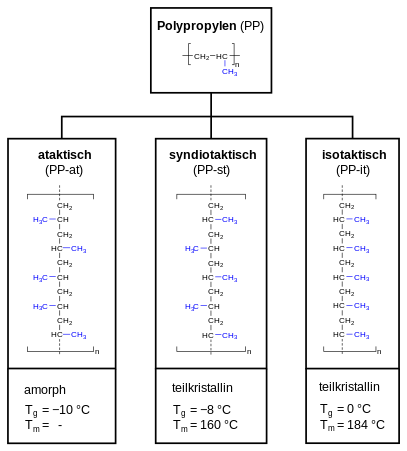 The term tacticity describes for polypropylene how the methyl group is oriented in the polymer chain. Commercial polypropylene is usually isotactic. This article therefore always refers to isotactic polypropylene, unless stated otherwise. The tacticity is usually indicated in percent, using the isotactic index (according to DIN 16774). The index is measured by determining the fraction of the polymer insoluble in boiling heptane. Commercially available polypropylenes usually have an isotactic index between 85 and 95%. The tacticity effects the polymers physical properties. As the methyl group is in isotactic propylene consistently located at the same side, it forces the macromolecule in a helical shape, as also found in starch. An isotactic structure leads to a semi-crystalline polymer. The higher the isotacticity (the isotactic fraction), the greater the crystallinity, and thus also the softening point, rigidity, e-modulus and hardness.[11]:22

Atactic polypropylene, on the other hand, lacks any regularity which makes it unable to crystallize and amorphous.

Isotactic polypropylene can exist in various crystalline modifications which differ by the molecular arrangement of the polymer chains. The crystalline modifications are categorized into the α-, β- and γ-modification as well as mesomorphic (smectic) forms.[13] The α-modification is predominant in iPP. Such crystals are built from lamellae in the form of folded chains. A characteristic anomaly is that the lamellae are arranged in the so-called "cross-hatched" structure.[14] The melting point of α-crystalline regions is given as 185[15][16] to 220 °C,[15][17] the density as 0.936 to 0.946 g·cm−3.[18][19] The β-modification is in comparison somewhat less ordered, as a result of which it forms faster[20][21] and has a lower melting point of 170 to 200 °C.[15][22][23][24] The formation of the β-modification can be promoted by nucleating agents, suitable temperatures and shear stress.[20][25] The γ-modification is hardly formed under the conditions used in industry and is poorly understood. The mesomorphic modification, however, occurs often in industrial processing, since the plastic is usually cooled quickly. The degree of order of the mesomorphic phase ranges between the crystalline and the amorphous phase, its density is with 0.916 g·cm−3 comparatively. The mesomorphic phase is considered as cause for the transparency in rapidly cooled films (due to low order and small crystallites).[12]

Syndiotactic polypropylene was discovered much later than isotactic PP and could only be prepared by using metallocene catalysts. Syndiotactic PP has a lower melting point, with 161 to 186 °C, depending on the degree of tacticity.[26][27][28]

Atactic polypropylene has lower density, melting point and softening temperature than the crystalline types and is tacky and rubber-like at room temperature. It is a colorless, cloudy material and can be used between -15 and +120 °C. Atactic polypropylene is used as a sealant, as an insulating material for automobiles and as an additive to bitumen.[29]

Polypropylene is liable to chain degradation from exposure to temperatures above 100 °C. Oxidation usually occurs at the tertiary carbon centers leading to chain breaking via reaction with oxygen. In external applications, degradation is evidenced by cracks and crazing. It may be protected by the use of various polymer stabilizers, including UV-absorbing additives and anti-oxidants such as phosphites (e.g. tris(2,4-di-tert-butylphenyl)phosphite) and hindered phenols, which prevent polymer degradation.[1]

Microbial communities isolated from soil samples mixed with starch have been shown to be capable of degrading polypropylene.[30] Polypropylene has been reported to degrade while in human body as implantable mesh devices. The degraded material forms a tree bark-like layer at the surface of mesh fibers.[31]

PP can be made translucent when uncolored but is not as readily made transparent as polystyrene, acrylic, or certain other plastics. It is often opaque or colored using pigments.