By integrating an OPS-Ingersoll EDM automation solution, a toolmaker has increased productivity and reduced electrode wear.

If investing in a new blow molding machine , one has to decide whether performance can be increased to achieve greater throughput. The tool  construction team at Coko Werk,

Bad-Salzuflen, Germany, faced this question when two old EDM machines had to be replaced by a new one. 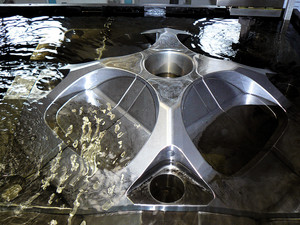 One unit takes the place of two, and throughput rises When the company wanted to replace two of its EDM machines, they turned to OPS-Ingersoll for an automated solution. With workpieces of 1,270 mm x 1,770 mm, and the small pallet sizes of 320 mm x 320 mm, automating the new Gantry Eagle 1200 machine was hard to imagine. Moreover, pallets , software, job management

systems and external measurement systems had to be incorporated.

After weighing all the options, Steffen Bierbach, manager of tool production at Coko, chose to take the risk. “We compared isolated applications and linear systems, and then decided on the OPS-Ingersoll solution with an integrated robot system. We were sure we could achieve our objectives with this system.”


One of the initial goals was increased  blow molding machine  capacity to eliminate bottlenecks for the production of several identical large tools. Since the company

wanted uninterrupted production, the blow moldiing machine  was delivered and ready to go within the same week. In addition, Bierbach noted that the machine up-time, flexibility and efficiency were higher than initially expected. “Today we have returned to typical batch-size-one production, though we are happy to say that there are positive results here, too,” Bierbach said. “To be precise, although we have reduced the number of EDM machines from four to three, throughput times have improved.

“In the past, spontaneous tasks required a large amount of organisation,” he added. “Modern automation, however, makes it possible to react fast. This is

particularly important to Coko as a very large proportion of production involves plastics and changes have to be made almost hourly.”