Gasgoo.com (Shanghai) - The Chinese passenger automobile market showed slight signs of recovery in April. According to China Passenger Car Association statistics compiled by Gasgoo.com (Chinese), over 404 automobile models were sold in the country over the course of the month.

Over 237 individual sedan models were sold in China in April. Monthly sedan sales totaled 908,730 units, down 0.7% year-on-year. Shanghai Volkswagen’s New Lavida led the charts with a respectable lead over the competition, going on to become the best selling sedan model of the month. The New Lavida’s sales for the month totaled 34,503 units, up 66.7% year-on-year. Dongfeng Nissan’s Bluebird Sylphy managed to achieve total sales of 29,498 units, making it the second-best selling sedan model of the month. Meanwhile, both the New Santana and Elantra Langdong suffered double-digit declines in sales year-on-year. 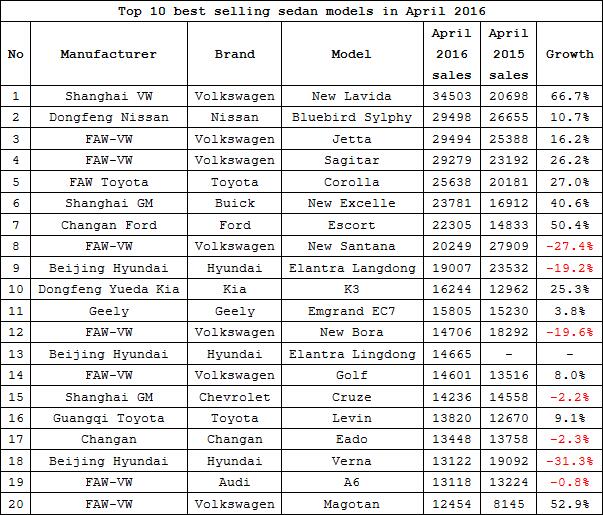 Domestic own brands’ performed relatively poorly in the sedan segment, with only two models, the Geely Emgrand EC7 and Changan Eado, managing to make the top 20, and none of them breaking into the top 10. The Emgrand EC7 finished in 11th place with total monthly sales of 15,805 units, while the Eado ended up in 17th place with sales of 13,488 units, down 2.3% year-on-year.

Over 125 individual SUV models were sold in China in the month of April. Own brand models’ performances this April were not up to previous months, with only four own brand models making the top ten. The Great Wall Haval H6 was the best-selling SUV of the month, followed by the GAC Trumpchi GS4, SAIC-GM-Wuling Baojun 560, Buick Envision, VW Tiguan, Honda XR-V, Honda CR-V, Changan CS35 and Nissan X-Trail. 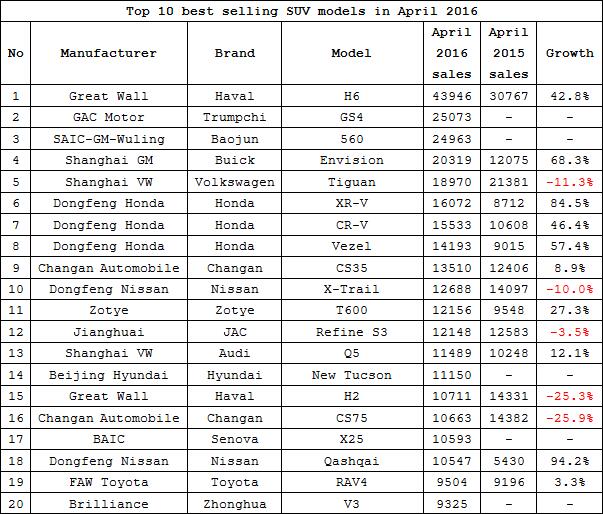 With total monthly sales of 43,946 units, the Great Wall Haval H6 remains the best-selling Chinese SUV by a healthy margin. With its sales growing 42.8%, the H6’s dominant position seems fairly secure. The best-selling foreign brand SUV of the month, the Buick Envision, managed to attain sales of 20,319 units, up 68.3% year-on-year. Also worth mentioning is Honda’s performance in the SUV segment, with three of their models managing to make it into the top 10.