Release time:2016-01-30
Gasgoo.com (Shanghai) - Changan Automobile was once again the best-performing domestic own brand manufacturer in terms of passenger automobile sales made in 2015. Over 900,000 Changan branded automobiles were sold last year, approximately 30% more than the amount sold in 2014. In contrast to fellow own brand manufacturer Great Wall, which has exclusively focused on its SUV models at the expense of its sedan sales, Changan has managed to maintain a fairer balance between its various model types. 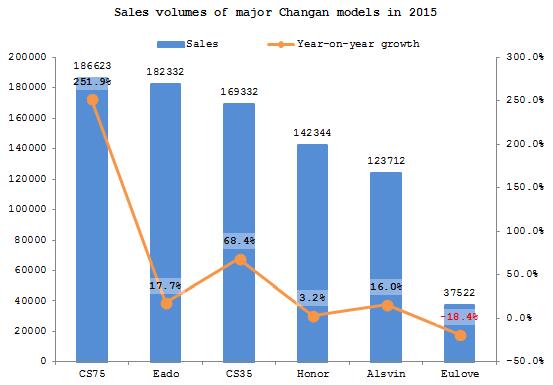 2015 sales of the small-sized CS35 in 2015 totaled 169,332 units, up 68.4% from the amount sold the previous year. Changan has managed to take advantage of the growing interest Chinese consumers have showed towards smaller SUVs last year. Both the compact CS75 and small CS35 have achieved a considerable amount of success and praise over the course of 2015.

The Eado remains one of Changan’s key models. Total sales of the Eado and Eado XT in 2015 totaled 182,332, up 17.7% from the previous year. The Eado was Changan’s second best-selling model in December, when its monthly sales totaled 14,182 units. The Eado was the second-best selling own brand sedan of 2015, ranking only behind Geely’s Emgrand EC7. Meanwhile 2015 sales of the Yuexiang series totaled 123,712 units, representing year-on-year growth of 16.0%.

Changan’s performance in the minivan segment was not on par with its SUV and sedan sales. The latter half of the year actually saw Changan minivan sales growth rates slip, reaching a low of -38.0%, before recovering in December. Sales of the Changan Honor totaled 142,344 units over the course of the year, representing very minor year-on-year sales growth of 3.2%. Meanwhile annual sales of the Eulove totaled 37,522, down 18.4% from 2014. Sales growth rates for the Eulove have been continually declining since May of 2015.

Previous：Volkswagen will invest an annual 4b Euros to China; Domestic BEVs are expected to be launched in 2019
Next：China’s Subsidy for Energy Conservative Models Came to an End, the Sales of Small Models Decreased
Posts by Topic
Recent Posts