Gasgoo.com (Shanghai) - 2015 marked the second year Changan Automobile ranked as the best-performing domestic own brand passenger automobile manufacturer, leading its competitors by a large margin. However, despite the over 30% year-on-year sales growth that Changan achieved that year, the manufacturer’s performance in January of this year failed to meet that same level. According to statistics compiled by Gasgoo.com (Chinese), Changan sold over 10,000 passenger automobiles in January. Despite that performance, sales of most of its models fell year-on-year. 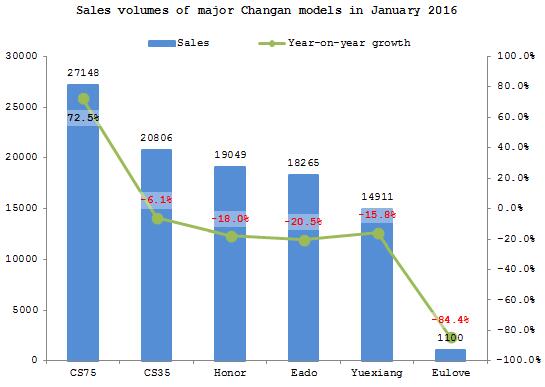 The CS75 and CS35 continued to rank as Changan’s two leading SUV models. Sales of the CS75 in January totaled 27,148 units, marking the third consecutive month sales of the model exceeded 20,000 units. Sales of the last month January increased 72.5% from 15,739 units sold in January 2015, making it the only Changan model to achieve positive year-on-year sales growth. Changan CS75 hopes to expand on its success with plans to release a seven-seat version of the vehicle later this year. Meanwhile January 2016 sales of the Changan CS35, ranked as the second best-selling small SUV in China of 2015, totaled 20,806 units, 6.1% less than the 22,155 units sold the previous January.

Much like its competitors, Changan has also taken note of the promising prospects of the Chinese SUV market. The manufacturer has announced plans to release three new SUV models, the CS15, CS95 and CX70, by the end of this year.

The Eado continues to be Changan’s best-selling sedan model. It performed very strong in 2015, finishing only behind the Geely Emgrand EC7. However, sales performance of the Eado this January failed to keep up. Total January sales of the Eado were 18,265 units, 28.8% more than the amount sold the previous month, but down 20.5% year-on-year.

The Yuexiang, which also benefited from the performance of the Eado to some extent in the past, also saw its sales fall in January. A total of 14,911 Yuexiang sedans were sold this January, down 15.8% year-on-year.

The Changan Honor has also been well-received, finishing third in minivan sales last year only behind SAIC-GM-Wuling’s Hongguang and Baojun 730. The Honor also finished third in January with total sales of 19,049 units, down 18.0% from the 23,238 units sold a previous January. Despite that, that sales volume was still over 10,000 units more than the 9,047 sold the previous month.