Gasgoo.com (Shanghai) - According to China Passenger Car Association statistics compiled by Gasgoo.com (Chinese), SAIC Motor continues to be China’s largest passenger automobile manufacturer in terms of new car sales made over the first quarter of the year. Aside from SAIC leading the charts, Changan Automobile’s performance was also impressive, while both GAC Group and Brilliance Automobile posted high year-on-year sales growth rates.

SAIC was the country’s largest seller of passenger automobiles in the first quarter of 2016, followed by Dongfeng, Changan, FAW, BAIC, GAC, Great Wall, Geely, Brilliance and Chery. Those ten manufacturers combined accounted for 91% of all new car sales made over the course of the quarter, with the top six of them accounting for over 80% by themselves. 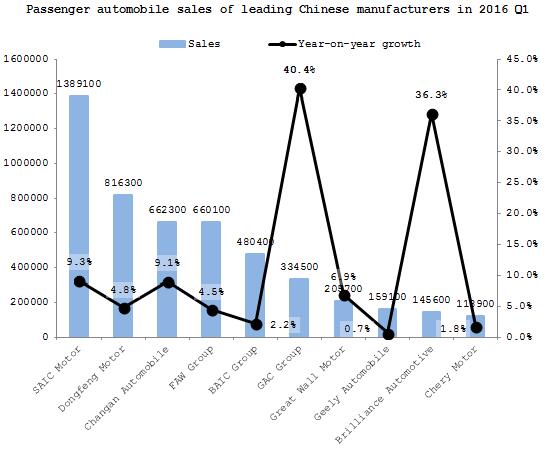 SAIC sold a total of 1.38 million automobiles in the first quarter, up 9.3% from the previous year. SAIC’s lead over its competitors remains incredibly large. A great amount of this growth came from the stellar performance of SAIC-GM-Wuling’s new Baojun 560. SAIC-GM-Wuling’s sales for the quarter totaled 388,144 units, representing 32.9% year-on-year sales growth.

Number two Dongfeng posted total sales of 816,271 units for the quarter, lagging drastically far behind SAIC, equivalent to year-on-year growth of 4.8%. Both Dongfeng’s own brands and Japanese joint ventures performed well with strong year-on-year sales growth, while sales of Korean and French JVs fell over the same period of time.

Changan’s stunning performance impressed many as it finished in third place behind Dongfeng. Changan sold a total of 662,300 vehicles in the first quarter, surpassing previous third place entry FAW. Despite the strong growth of subsidiary FAW Toyota, FAW was still held back by Tianjin FAW and FAW Car, only selling a total of 660,100 vehicles.

Number five BAIC was further behind with just 495,200 new car sales made. Despite the fact that their sales volumes were lower, the lower tier of manufacturers did manage to post very impressive year-on-year sales growth. Among them were GAC and Brilliance, which achieved year-on-year sales growth rates of 40.4% and 36.3%, respectively. Both manufacturers benefited greatly from SUV and new model sales.