Gasgoo.com (Shanghai) - A total of 333,691 domestic own brand SUVs were sold in the month of April, statistics compiled by Gasgoo.com (Chinese) show. That figure is up 38.4% from a year ago and represents an overall market share of 54.6%, compared to 51.6% in last April. From January to April, own brand SUV sales have totaled 1.48 million units, up 53.1% year-on-year.

Although the SUV market as a whole has been growing rapidly, individual sales of the some of the most well-known own brand SUV models have actually been decreasing. 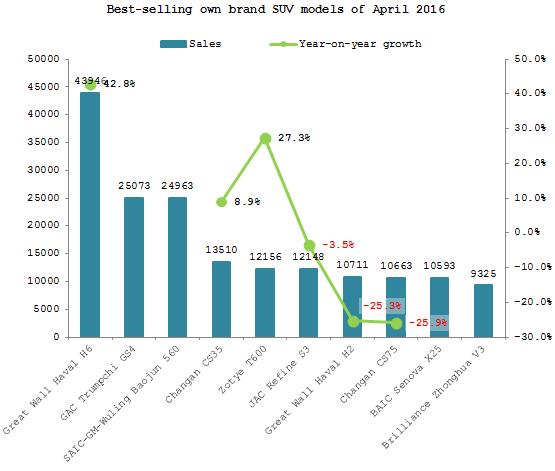 The own brand SUV segment continues to be dominated by the Haval H6, Trumpchi GS4, Baojun 560 and Changan CS35, which are far outperforming their rivals. The Haval H6 leads the charts by a considerable margin with total monthly sales of 43,946 units, up 42.8% from last April. The Haval H6 has even managed to surpass SAIC-GM-Wuling’s ever-popular Hongguang in the overall sales chart this month. Behind the Haval H6 were GAC’s Trumpchi GS4 and SAIC-GM-Wuling’s Baojun 560, both of which have been on the market for less than a year now. April sales of the Trumpchi GS4 and Baojun 560 totaled 25,073 units and 24,963 units, respectively. In fourth spot was the Changan CS35, which managed to maintain stable sales growth of 8.9%. The CS35’s monthly sales of 13,510 make it the ninth best-selling SUV in the country overall.

While the performance of those four models was very admirable, models on the other side of the charts are failing to keep up. The JAC Refine S3, Great Wall Haval H2 and Changan CS75, whose monthly sales respectively totaled 12,148 units, 10,711 units and 10,663 units, all suffered negative year-on-year sales growth in April. While the Refine S3’s sales decreased 3.5%, those of the Haval H2 and CS75 fell in the double digits, down 25.3% and 25.9%, respectively.

BAIC’s new Senova X25, which debuted last December, managed to make it into the top ten with monthly sales of 10,593 units. Having already released two models for its Senova brand, the X25 and X55, BAIC has announced an all-new SUV, the Senova X35, at this year’s Auto China show in Beijing.

Further down the charts in the number ten spot was the Brilliance Zhonghua V3, which fell two places from March. 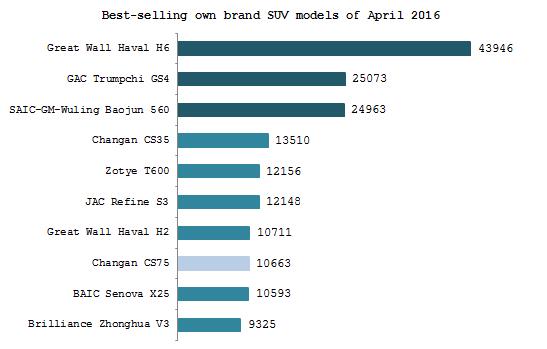 Compact and small SUVs made up most of the models on the top ten sales charts, with the only mid-size SUV managing to make the cut being the Changan CS75. According to overall sales figures, 62.0% of all own brand SUVs sold over the course of the month were compact SUVs, while another 28.5% were small SUVs. Sales of compact and small SUV models combined to account for 90.5% of all SUVs sales made in the country. 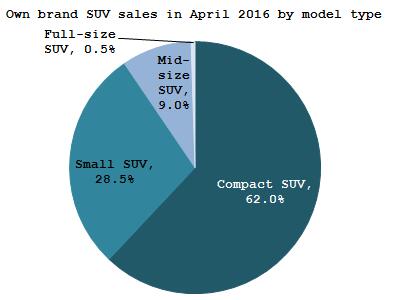 It remains to be seen whether or not own brand SUVs will be able to continue prospering in the SUV segment as joint ventures begin to introduce new models in the coming months.