Gasgoo.com (Shanghai) - Fiscal reports for the first quarter of the year show that a number of Chinese automobile manufacturers have suffered negative year-on-year sales growth. First quarter net profit results range from 7.93 billion RMB earned by SAIC Group on the one end to FAW Car’s net deficit of 423 million RMB on the other. 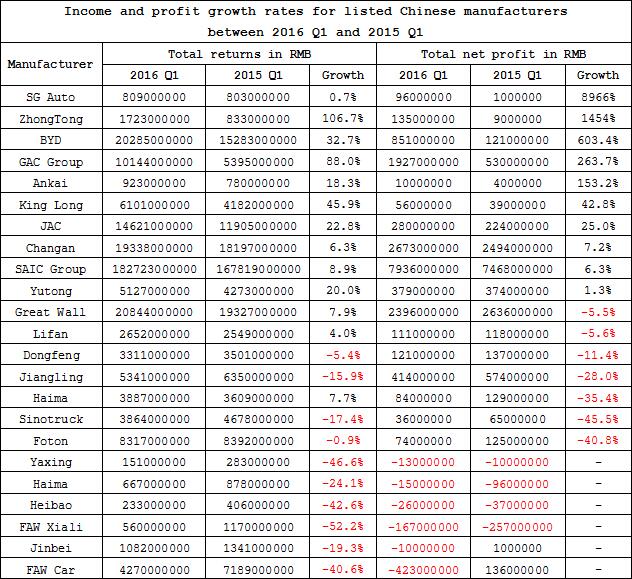 SAIC Group continued to lead the domestic market, with quarterly revenue and net profits of 182.72 billion RMB and 7.93 billion RMB, representing year-on-year growth rates of 8.9% and 6.3%, respectively. Worth pointing out is that those growth rates are below the industry average.

The manufacturers with the most astounding growth rates for quarterly net profits were SG Auto and ZhongTong Coach, whose year-on-year growth rates were several tenfold higher than the previous year. However this rapid growth is mainly due to the fact that these companies are not very large.

BYD has been benefiting greatly from the increasing trend towards new energy vehicles, with its net profits growing sixfold to 851 million RMB and revenue increasing 32.7% to 20.28 billion RMB.

Among the manufacturers performing worse this quarter than last year was FAW Car, which has gone from generating positive net profit to a net deficit of 423 million RMB. FAW Car attributes its declining sales to increasingly fierce market competition. Jinbei is another company who has gone from making a profit to being in the red, with a net deficit of 100 million RMB for the quarter.