In tooling for injection molded plastic components, little things mean a lot. For moldmakers, these little things require the slowest metal-removal process, which is EDM. At Michael Tool & Mold (Windsor) Ltd. in Canada, machining blocks of graphite into EDM electrodes was one of the mold build stages they wanted to improve.

To do that, Michael Tool retrofitted two key production machines with new constant velocity cutting (CVC) controls. Developed by Miceli Technologies, CVC is a quantum leap over conventional numerical controls for machine tools. Both companies are based near Windsor. Michael Tool in Oldcastle, ON and Miceli Technologies in Essex.

These surfaces and details must be “burned” into the steel with EDM. Three, four and even five sets of electrodes may be required. The shop’s owners—John Sulaiman and Andy Hui—have found that their Miceli CVC retrofits have considerably reduced most of the tedious and costly hand finishing that was such a big part of electrode production.

Sulaiman and Hui also find the CVC productivity gains help offset unprecedented volatility in orders and ever-tighter delivery schedules. “It is common for customers to change their minds, starting jobs and stopping them,” says Sulaiman. “We have been compelled to change not only our way of thinking, but also the way we manufacture.”

Michael Tool & Mold’s response to this volatility has been to boost flexibility to respond to sudden change. Because machining EDM electrodes is crucial to most molds, a big portion of the gain is due to the two Miceli CVC retrofits. They went onto a pair of Fadal 4020 VMCs in 2008 and early this year. 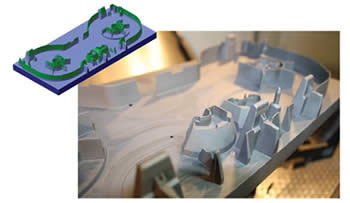 Graphite Gains at a Glance
Benefits in electrode machining attributable to the Michael Tool & Mold retrofits of constant velocity controllers (CVCs) from Miceli Technologies include:

Both Fadals were originally equipped with relatively simple, stock numerical controls. Those controls had tiny buffer memory—where machine tool programs are stored as they run approximately 250 lines. That was enough for only the shortest, simplest and least precise programs. Almost any job at Michael Tool required far more lines of code than the controller could handle.

That limitation meant that the original controls were constantly reloading code while the machine tools ran short of data during cutting. Sulaiman explains that this buffer overload meant data starvation at the machine tool. Machine operators were forced to reduce the programmed feedrate, wait for the machine to catch up and then reset the feedrate back to its original setting. The result was an endless cycle of slowing down and speeding up.

These inconsistent feedrates dealt sizeable blows to machining productivity and cutting tool life. An option was to run at a non-optimal feedrate the controller could handle, but issues of cycle time and surface finish arose.

The MTI retrofits were easy decisions. The alternatives were:

Moreover, getting a new or used machine tool fully into production takes several weeks. The retrofits were done in Michael Tool’s shop in fewer than three weeks each. “Relative to the amount of work they did, downtime was minimal,” Sulaiman says. “We would have lost a lot more time if we had bought a new machining center.”

In electrodes, Michael Tool’s gains from the CVC retrofit are dramatic—the ability to program to as little as 0.0001-inch instead of 0.0007. “That is a drastic tightening in programming tolerances,” he notes. “It eliminated hand finishing on some electrodes completely and reduced the remainder by 50 percent. Constant cutting velocity, even around corners,” Sulaiman adds, “gives us smooth machine tool movement. In electrodes that is critical in finishes.”

CVC has also taken electrode machining from a three-stage process to just roughing and finishing; semi-finish machining was eliminated. In turn that has helped hike overall shop productivity and boosted on-time delivery performance.

Michael Tool is also getting much better cutting tool life. “Our diamond-coated cutters and end mills now last up to six times longer than the coated-carbide cutters we were using,” Sulaiman explains. “The longer life is due to the greater wear resistance of the diamond coating and the constant feedrates the MTI controllers provide us.”

In addition, excessive stress on the Fadals that comes with the abrupt acceleration and deceleration of conventional machining is avoided. “Less stress on the machine means less wear and tear,” Sulaiman points out, “and that ultimately equates to less downtime” due to repairs.

“The time we save in machining graphite electrodes has proven to be pivotal in remaining competitive and reducing leadtimes,” he concludes, “doing it right the first time helps us stay competitive.”

Previous：CHINAPLAS 2017 Thrives in Intelligent Manufacturing, High-tech Materials and Green Solutions
Next： Small-size vehicles will meet the end of favorable policies, and Japanese brands will launch a fight
Posts by Topic
Recent Posts